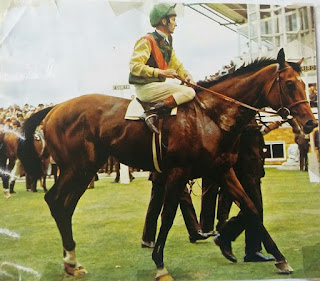 Nijinsky, named after Russian-born ballet dancer Vaslav Nijinsky, was a bay colt by Northern Dancer, instantly recognisable by his three white feet and almost perfectly heart-shaped white marking between his eyes. He has the distinction of being the only horse since Bahram in 1935 to win the 2,000 Guineas, the Derby and the St. Leger, collectively known as the “English Triple Crown”.

Owned by Charles Engelhard – who was a friend of Ian Fleming and, apparently, the inspiration for Bond villain Auric Goldfinger – and trained by Vincent O’Brien at Ballydoyle, Co. Tipperary, Nijinsky achieved a Timeform rating of 138 as a three-year-old, leaving him officially 2lb inferior to the so-called “greats” of the Timeform era. Nevertheless, having won major races between 6 furlongs and 1 mile 6 furlongs, Nijinsky was, unquestionably one of the most versatile racehorses of the twentieth century.

Nijinsky was unbeaten in five races as a juvenile, his most important victory coming in the Dewhurst Stakes, over 7 furlongs, at Newmarket. He started his three-year-old campaign by winning the Gladness Stakes, again over 7 furlongs, at the Curragh in April, 1970, before heading back to Newmarket for the 2,000 Guineas. Ridden by Lester Piggott, he started 4/7 favourite and, after travelling well throughout, only had to be pushed out to beat Yellow God by 2½ lengths.

Piggott had to work a little harder in the Derby at Epsom, but the 11/8 favourite was well on top at the finish, beating the the French pair, Gyr and Stintino, by 2½ lengths and 3 lengths. Charles Engelhard described the victory as “the best thing I ever saw”. The Irish Sweeps Derby looked a formality and so it proved, with Irish stable jockey Liam Ward, reinstated over Lester Piggott, oozing confidence as he steered the 4/11 favourite to a comfortable 3-length win over Meadowville, ridden by Piggott.

Piggott was back aboard when Nijinksy “trotted up” in the King George VI and Queen Elizabeth Stakes at Ascot and, after a forced absence due to ringworm, again when he recorded his eleventh successive victory in the St. Leger. Nijinsky lost his unbeaten record when controversially beaten a head by Sassafras in the Prix de l’Arc de Triomphe at Longchamp and was beaten again, at odds of 4/11, in the Champion Stakes at Newmarket two weeks later.