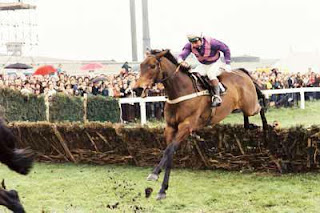 Owned by Reg Spencer and trained by Peter Easterby at Habton Grange, near Malton, North Yorkshire, Night Nurse is best known for winning the Champion Hurdle at the Cheltenham Festival twice, in 1976 and 1977, but also has the distinction of being the highest rated hurdler of the Timeform era.

His first victory in the Champion Hurdle, which came at the expense of Lanzarote and Comedy Of Errors, among others, was part of a ten-race winning streak, which also included the Irish Sweeps Hurdle, the Welsh Champion Hurdle and the Scottish Champion Hurdle. His second came at the expense of such luminaries as Monksfield, Sea Pigeon and Bird’s Nest, not to mention Dramatist, Beacon Light and Master Monday, any of whom would have been a worthy winner in any other year. In fact, the 1977 Champion Hurdle is widely considered, by Timeform, the Racing Post and others, the best ever run and set a benchmark for decades to come.

Less than three weeks after the Champion Hurdle, on Grand National Day, 1977, Night Nurse put up a career-best performance, in terms of ratings, forcing a dead-heat with Monksfield, who was receiving 6lb, in the Templegate Hurdle at Aintree.

Switched to steeplechasing, Night Nurse enjoyed an extremely successful novice season in 1978/79 and was quietly fancied to become the first horse in history to complete the Champion Hurdle - Cheltenham Gold Cup double. However, he blundered away his chance at Cheltenham, eventually finishing tailed off behind stable companion Alverton. He missed most of the 1979/80 season through injury but, on his return, produced some magnificent displays of fast, accurate jumping that was the hallmark of his career. He finished second, beaten 1½ lengths, behind stable companion Little Owl in the Cheltenham Gold Cup in 1981 and was pulled up, despite starting favourite, in the same race in 1982.

Night Nurse was retired from racing, as a 12-year-old, on New Year’s Day, 1983, having won 32 of his 64 races over hurdles and fences and earned over £132,000 in prize money. When he died in 1998, at the age of 27, Peter Easterby summed him up, saying, “What made Night Nurse so special was he was a natural jumper, brilliant from the first time we ever schooled him. He was a very, very brave horse, hard and brave.”