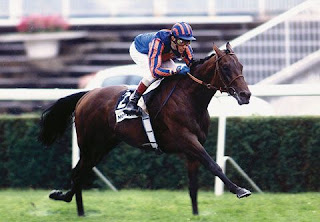 Bred by Sir James Goldsmith, owned by Michael Tabor and trained by John Hammond in Chantilly, France, was a bay gelding by Sadler’s Wells, probably best remembered for winning the Derby, the Irish Derby and the Prix de l’Arc de Triomphe as a 3-year-old and the King George VI and Queen Elizabeth Diamond Stakes as a 4-year-old.


In fact, his victory in the latter contest, in 2000, is widely considered the easiest since Nijinsky and Lester Piggott toyed with the opposition three decades earlier. Certainly, Montjeu started the shortest-priced favourite, at 1/3, since Nashwan, at 2/9, beat Cacoethes by a neck in 1989. Facing just six rivals, all of whom had 11lb or more to find on official figures, Montjeu made progress from the rear of the field with two furlongs to run and cruised home by 1¾ lengths from Fantastic Light with jockey Mick Kinane barely moving in the saddle. Kevin Darley, rider of the fourth home, Beat All, said afterwards, “It looked as if he [Monjeu] had just joined in at the turn.”


Montjeu ran his last race at Churchill Downs, Kentucky, in November, 2000, finishing a never-nearer seventh of 13, beaten 4½ lengths, behind Kalanisi in the Breeders’ Cup Turf. At the end of his racing career, he had won 11 of his 16 races, including six at the highest level and earned over £2.2 million in total prize money. His Timeform rating of 137 was the same as that achieved by Derby winners Grundy, Troy and Peintre Celebre.


When he died in 2012, due to complications arising from acute septicaemia, trainer John Hammond said, “He was a wonderful racehorse and a wonderful stallion. If you wanted to get yourself a Derby horse, he was your man. If he had been human, he would have been an eccentric genius.”