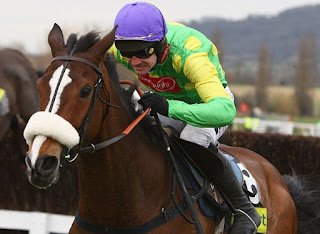 According to Timeform, Kauto Star was the fourth best steeplechaser since World War II, rated inferior only to Arkle, Flyingbolt and Sprinter Sacre. Owned by Clive Smith and trained by Paul Nicholls, Kauto Star won 23 of his 41 races, including the Cheltenham Gold Cup twice and the King George VI Chase at Kempton an unprecedented five times.

Bred in France, Kauto Star easily won a novices’ chase at Newbury on his debut for Paul Nicholls in December, 2004, but was subsequently beaten at odds of 2/11 – only by a short head after being remounted – at Exeter the following month and didn’t race again that season. He ran only twice in 2005/06, winning the Tingle Creek Chase at Sandown, but falling at the third when favourite for the Queen Mother Champion Chase at the Cheltenham Festival.

The following season, 2006/07, Kauto Star was unbeaten, winning the Betfair Chase at Haydock, the Tingle Creek at Sandown, the King George VI Chase at Kempton and the Cheltenham Gold Cup. The rest, as they say, is history. At the end of his career, Kauto Star had never finished out of the first three in all 35 of his completed starts and become the first horse in the history of National Hunt racing to earn over £2 million in win and place prize money. Upon his retirement in October, 2012, Ruby Walsh, who rode him to 17 of his 23 victories said of him, “He’s the horse of my lifetime. I'm very lucky to be the one who got to ride him.”

Following his retirement from racing, Clive Smith transferred Kauto Star from Paul Nicholls to eventing rider Laura Collett without informing, and against the wishes of, his former trainer. Nicholls said, “…what upset me and my team here is when Clive announced that he had spoken to experts about the horse’s future, but failed to consult and listen properly to the team that had looked after him here for the past nine years.”