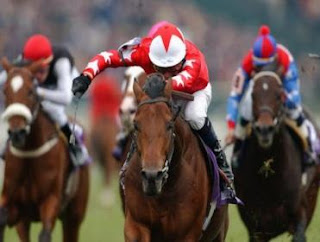 Owned by Sir Alex Ferguson and Susan Magnier and trained by Aidan O’Brien, Rock Of Gibraltar had the distinction of winning seven consecutive Group 1 races in 2001/02, in so doing breaking the record set by Mill Reef 30 years earlier.


Rock Of Gibraltar raced seven times as a juvenile, winning five times, including back-to-back Group 1 victories in the Grand Crierium - Lucien Barriere at Longchamp and the Dewhurst Stakes at Newmarket, both over 7 furlongs, in October. Stepped up to a mile for the 2,000 Guineas at Newmarket on his three-year-old debut, the Danehill colt led the group on the far side over a furlong out and was ridden out to beat stable companion Hawk Wing, who raced on the near side, by a neck.


Rock Of Gibraltar subsequently bolted up in the Irish 2,000 Guineas at the Curragh three weeks later and readily beat old rival Landseer – whom he’d denied by a short head in the Dewhurst Stakes – in the St. James’s Palace Stakes at Royal Ascot the following month. Two more Group 1 wins, in the Sussex Stakes at Goodwood in July and the Prix de Moulin de Longchamp in September, followed before a trip across the Atlantic to contest the Breeders’ Cup Mile at Arlington Park, Chicago. Sent off at odds-on, for the fifth time in a row, Rock Of Gibraltar finished a never-nearer second, beaten three-quarters of a length, behind 26/1 outsider Domedriver.


Understandably, Rock Of Gibraltar was named Cartier Three-Year-Old Colt and Cartier Horse of the Year in 2002.


In 2004, Ferguson threatened John Magnier, owner of Coolmore Stud, with court action in an extraordinary dispute over stud fees for Rock Of Gibraltar, before settling out of court in a compromise deal worth £2.5 million. In his autobiography, Ferguson dismissed the episode in a paragraph or two, but later told a press conference, “It was straightforward. I had an agreement with John Magnier that, after the settlement, nothing will [sic] be said about it at all. I’ve said nothing and they’ve said nothing. That’s how it is and that’s how it should be.”
Posted by G at 05:05 No comments:

Needle In a Haystack 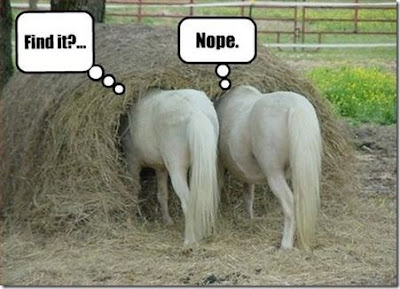 This is often what picking winners can feel like :-D
Posted by G at 04:18 No comments: