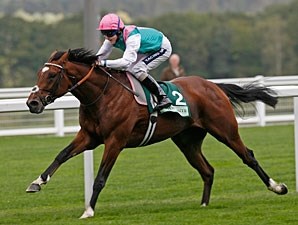 His final victory, a workmanlike 1¾-length win over Cirrus Des Aigles in the Qipco Champion Stakes at Ascot on October 20, 2012, confirmed his place in racing history alongside legendary undefeated champions, such as Eclipse, Ormonde and Ribot. At the end of his racing career, he had earned £2,998,302 in win prize money.

Frankel was bred by Juddmonte Farms, owned by Saudi billionaire Prince Khalid Abdullah, and trained throughout his career by the late Sir Henry Cecil at Warren Place Stables in Newmarket, Suffolk. He was named after the late Bobby Frankel, a celebrated American trainer who saddled many winners for Prince Khalid. Sir Henry, who died from stomach cancer in June, 2013, freely admitted that his relationship with Frankel was key to coping with the ravages of chemotherapy in the last months of his life.

Frankel started favourite for all 14 races and odds against just once, on his debut in a European Breeders’ Fund Maiden Stakes at Newmarket in July, 2010. Indeed, that race was the closest he ever came to being beaten, but he had more in hand of Nathaniel than his half-a-length winning margin might imply. In fact, apart from one occasion, in the St. James’s Palace Stakes at Royal Ascot in 2011, he never gave his supporters the slightest cause for concern, although he was racing at prohibitive odds for most of his career.

Since his retirement Frankel has become won of the most exciting young sires in the world, producing more Pattern and Listed winners than his own sire, Galileo, Dubawi and Sea The Stars at the equivalent stage of their careers.
Posted by G at 05:41