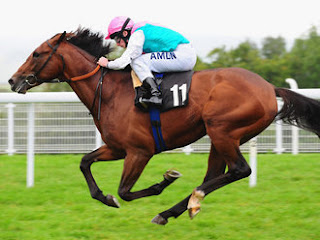 Bred by Juddmonte Farms, owned by Prince Khalid Abdullah and trained by Sir Michael Stoute, Workforce was a bay colt by 2,000 Guineas winner King’s Best, famous for winning the Derby and the Prix de l’Arc de Triomphe in 2010. In fact, Workforce won just four of his nine races between 2009 and 2011, but his two successes at the highest level contributed to total career earnings of over £3.2 million and were sufficient for him to be named Cartier Three-Year-Old Colt in 2010.


Having won his maiden at Goodwood in September, 2009, with consummate ease, Workforce was beaten 3 lengths by subsequent Irish Derby winner Cape Blanco in the Dante Stakes at York on his reappearance the following May, although his cause wasn’t helped by the bit slipping through his mouth in the closing stages. In any case, he was sent off 6/1 joint second favourite for the Derby at Epsom three weeks later and, having collared pacemaker At First Sight with over a furlong to run, drew away to win by 7 lengths. In so doing, he broke the track record set by Lammtarra 15 years earlier.


The King George VI And Queen Elizabeth Stakes at Ascot in July was his next target but, despite starting 8/11 favourite against the older horses, he ran the proverbial ‘stinker’, trailing in fifth of six, beaten 16¾ lengths, behind the 4-year-old Harbinger, also trained by Sir Michael Stoute. Sir Michael said afterwards, “I didn’t know which was the better horse. I’ve never pitted them together. It was just a question of which horse had progressed the most since his last run.”


Workforce wasn’t seen again until the Prix de l’Arc de Triomphe at Longchamp in October where, in a rough race that saw the eventual seventh, Planteur, disqualified for causing interference, he ran on strongly to beat Japanese challenger Nakayama Festa by a head. In so doing, he gave Sir Michael Stoute his first winner of the race. Stoute said, “I'm thrilled to have won it with this horse, especially after he was so brilliant in the Derby and inexplicably disappointing in the King George.”