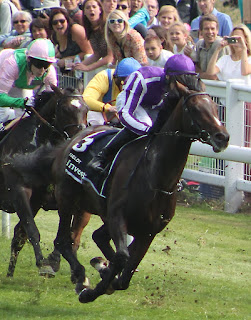 Bred by Sheikh Abdulla Bin Isa Al-Khalifa, bought, as a yearling, by the Coolmore organisation and trained by Aidan O’Brien at Ballydoyle, Co. Kildare, Camelot, was a bay colt by Montjeu. He was one of the few horses of the modern era to attempt the traditional English Triple Crown – that is, the 2,000 Guineas, the Derby and the St. Leger – last won by Nijinsky in 1970.


Camelot raced just twice as a juvenile, easily winning his maiden at Leopardstown in July before giving his rivals similarly short shrift in the Racing Post Trophy at Doncaster in October, when stepped up to Group One level for the first time. He reappeared in the 2,000 Guineas at Newmarket the following May without the benefit of a preparatory run but, although left with plenty to do entering the final quarter of a mile, led inside the final furlong and stayed on well to justify favouritism, beating French Fifteen by a neck.


In the Derby at Epsom, Camelot started 8/13 favourite to beat just eight rivals – the smallest field since 1907 – and duly obliged, running on strongly to beat Main Sequence by 5 lengths, eased down. Aidan O’Brien said afterwards, “From day one he’s been exceptional, so I was really taking it race by race rather than by trip.”


In the Irish Derby later the same month, Camelot faced just five rivals, including stable companion Astrology, whom he’d already beaten at Epsom, and was sent off 1/5 favourite to extend his unbeaten record. Before the race, Aidan O’Brien had expressed concerns that the soft to heavy going at the Curragh might prove too testing for Camelot but, despite jinking left in the closing stages, he kept on well inside the final furlong to beat Born To Sea by 2 lengths.


Camelot was rested for six weeks until his bid for the Triple Crown at Doncaster in October. His nine rivals in the St. Leger included Thought Worthy, his old rival Main Sequence and Encke, who’d previously finished first, second and third in the Great Voltigeur at York. However, over the extra 2½ furlongs on Town Moor, Encke fared best of that trio and proved to be the proverbial fly-in-the-ointment for Camelot. Try as he might, the 2/5 favourite could never quite reel in the 25/1 outsider and Encke held on well to win by three-quarters of a length.
Posted by G at 04:50 No comments: