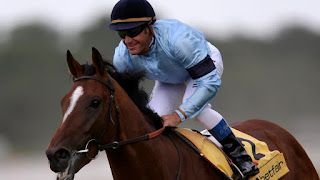 According to Timeform ratings, which are widely accepted as a definitive measure of the relative merit of racehorses from different generations, Harbinger was on a par with Shergar, Dancing Brave and Sea The Stars, but raced just once at the highest level.


In the King George VI And Queen Elizabeth Stakes at Ascot in July, 2010, he beat a field that included Workforce, the Derby winner, Cape Blanco, the Irish Derby winner, Youmzain, second in the Prix de l’Arc de Triomphe the previous October, and Daryakana, winner of the Hong Kong Vase the previous December, by 11 lengths. Sadly, Harbinger suffered a fractured left foreleg in a routine gallop on the Limekilns in Newmarket shortly afterwards and, although the injury wasn’t life-threatening, he never raced again.


Owned by Highclere Thoroughbred Racing and trained by Sir Michael Stoute, Harbinger was a slow maturing type, who didn’t race as a two-year-old and, frankly, didn’t appear to have any aspirations of becoming a bona fide Group 1 contender until he turned four. His three-year-old campaign started promisingly enough, with an impressive win in a maiden, over 1 mile 2 furlongs, at Chester in May on his second start, followed by another convincing victory in the Group 3 Gordon Stakes at Goodwood, on his first attempt at 1 mile furlongs, when next seen in July.


However, despite starting 13/8 favourite for the Group 2 Great Voltigeur Stakes at York the following month, he trailed in last of the seven runners, beaten 27¼ lengths, behind Monitor Closely. Given another short break, he was dropped back into Group 3 company for the St. Simon Stakes at Newbury in October, but could still only finish third of 11, beaten 6¼ lengths.


Harbinger blossomed as a four-year-old, though, striding clear for an impressive 3-length win over subsequent Yorkshire Cup winner Manifest in the John Porter Stakes at Newbury on his reappearance in April, followed by further convincing victories in the Group 3 Ordmonde Stakes at Chester and the Group 2 Hardwicke Stakes at Royal Ascot. Before his injury, he was already hot favourite for the Juddmonte International Stakes at York and the Prix de l’Arc de Triomphe but was, tragically, the highest rated horse in the world for just two weeks.