Where, and what, is Tattenham Corner? 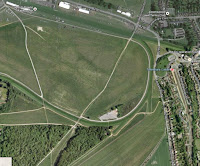 Strictly speaking, ‘Tattenham Corner’ is the local name for a residential area, more correctly known as Tattenhams, or Great Tattenham and Little Tattenham, in Epsom, Surrey. However, ever since the distance of the Derby, run at Epsom Downs Racecourse, was increased from a mile to a mile-and-a-half, in 1784, the name Tattenham Corner has been synonymous with the sharp, downhill, left-handed bend on the upper, or eastern, section of the racecourse, which leads runners into the three-and-a-half furlong straight.


The Chipstead Valley Railway, which originally terminated at the village of Kingswood, was extended to Tattenham Corner Railway Station – so-called because of its proximity to that part of the racecourse – in time for the Derby in 1901. It would appear as if the use of ‘Tattenham Corner’ to describe the residential area in the vicinity arose from the name of the railway station, rather than the other way around. For more horse racing questions and answers visit the racingquestions.co.uk site.
Posted by G at 13:09