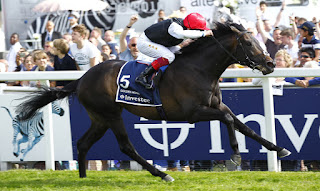 Bred and owned by Anthony Oppenheimer and trained by John Gosden in Newmarket, Suffolk, Golden Horn was named Cartier Horse of the Year in 2015 after winning the Derby, the Coral-Eclipse, the Irish Champion Stakes and the Prix de l’Arc de Triomphe. All in all, in a career lasting just over a calendar year, he won seven of his nine races and earned over £4.4 million in total prize money.


A March foal, Golden Horn raced just once as a juvenile, overcoming greenness to win a run-of-the-mill maiden stakes race over an extended mile at Nottingham in October, 2014. However, he improved significantly from two to three, winning the Listed Feilden Stakes, over 1 mile 1 furlong, on his reappearance at Newmarket the following April and readily accounting for stable companion Jack Hobbs in the Betfred Dante Stakes, over 1 mile 2½ furlongs, at York a month later.


Golden Horn was supplemented for the Derby, at a cost of £75,000 to connections, and faced 11 rivals, headed by Jack Hobbs and Giovanni Canaletto, trained by Aidan O’Brien, who’d been narrowly beaten in the Group 3 Gallinule Stakes at the Curragh on his previous outing. He was sent off 13/8 favourite and duly collected, running on well in the closing stages to record a comfortable 3½-length victory over his old rival Jack Hobbs.


Winning jockey Frankie Dettori, who’d first won the Derby eight years earlier on Authorized, said afterwards, “When you’re young, you don’t really appreciate the full importance of this Derby, so it means a great deal to win it for a second time.”


Golden Horn took on the older horses for the first time in the Coral-Eclipse at Sandown in July and, although involved in a good battle with The Grey Gatsby throughout the last half a mile, stretched clear in the closing stages to win by 3½ lengths. He faced The Grey Gatsby again in the Juddmonte International Stakes at York the following month and, as he had at Sandown, started 4/9 favourite to extend his unbeaten record to six. Golden Horn beat The Grey Gatsby easily enough but, surprisingly, failed to overcome 50/1 outsider Arabian Queen – a three-year-old filly officially rated 21lb inferior – going down by a neck.


Golden Horn resumed winning ways in the Irish Champion Stakes, won the Prix de l’Arc de Triomphe under a fine ride by Frankie Dettori and finished his career by finishing second in the Breeders’ Cup Turf at Keeneland, Kentucky.