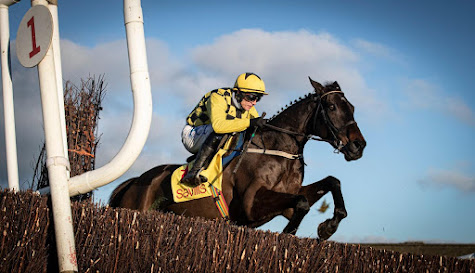 Al Boum Photo in the Savills Chase. Photo via https://twitter.com/HRIRacing

Irish trainer Willie Mullins has had plenty of luck with French-bred horses. A regular to France on scouting missions, Mullins has been part of lots of deals for French imports to train at his Closutton operation. It has clearly been a fruitful enterprise for Mullins, with the likes of six-time Cheltenham Festival winner Quevega, Arkle winner Douvan and Ryanair Chase winner Un De Sceaux heading from France to Ireland, and, ultimately, success at Cheltenham. You can add many others – Vroum Vroum Mag, Vautour, Min – to that list. The Racing Post terms it a “pipeline of success flowing between Chantilly and Clossuton.”.

But if you weigh up the recent Cheltenham Festival race results, you’d have to say that Al Boum Photo tops the lot of Mullins’ French-bred superstars. A two-time winner of the Gold Cup, and the hot-favourite for his third in just under two weeks’ time, Al Boum Photo could even eclipse Quevega as Mullins’ best French discovery.

However, Al Boum Photo is a curious horse. He is superb, of course – you can’t win two Gold Cups without being special. But he perhaps does not get the respect afforded to others who join him on the list as multiple Gold Cup winners. For instance, even though he might go one better than Kauto Star this year, there are few who rate Al Boum Photo ahead of Paul Nicholls’ beloved two-time Gold Cup winner.

So why the low-key profile? Perhaps it’s down to how lightly-raced Al Boum Photo has been over the last few years. Kauto Star, for instance, was also a five-time King George VI Chase winner, whereas Al Boum Photo has never appeared in the race. In fact, you rarely see Al Boum Photo at all. He has run just four races since winning his first Gold Cup in 2019, including the 2020 renewal.

Mullins tends to take him out for the Savills Chase each January, a Grade 3 in Tramore that acts as little more than a workout for Al Boum Photo. The trainer then puts him away until Cheltenham, where he is fresh for his tilt at the big one.

And that probably gets to the heart of Al Boum Photo and his reputation. His career was fine before the Gold Cup win in 2019. He had appeared at Cheltenham before, falling in the RSA Novices’ Chase in 2018 with Ruby Walsh in the saddle. Walsh, DJ Mullins and Paul Townend all rode him throughout 2017 and 2018, picking up a couple of Grade 1s in Ireland. But the constant changing of jockey suggested that he wasn’t the pick of Mullins’ stable at that time.

While the 2019 Gold Cup win under Townend wasn’t a shock – the horse had an SP of 12/1 – it was still a mild surprise. Al Boum Photo hasn’t looked back since. But he is perhaps beneficiary of Mullins’ nous as much as his own talent. You get the sense that Mullins has promised his owners that he will deliver Gold Cups, and little else manners. He is playing the percentage game.

Al Boum Photo’s reputation will perhaps not be helped by the fact that there is a lot of question marks over the field at this year’s Gold Cup. Many of the established horses, like Santini and Lostintranslation, have been in a terrible run of form. The likes of Royal Pagaille and A Plus Tard are untested at this level. So, if he wins, he’ll be a hat-trick hero, a history-maker. But the sense is that he won’t be venerated alongside the likes of Arkle, Best Mate and Kauto Star.