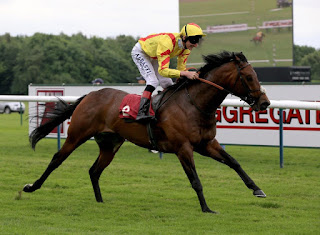 Bred by Paul and Marie McCartan under the banner of CBS Bloodstock, owned, since June, 2017, by Godolphin and trained by Clive Cox in Lambourn, Berkshire, Harry Angel was Cartier Champion Sprinter in 2017. In fact, he was the fourth highest-rated horse in Europe, behind only Battaash, Cracksman and Enable.


A February foal, Harry Angel began his racing career with defeat, by the minimum margin, in a novice stakes race, over 5 furlongs, at Ascot in May, 2016. He raced just once more as a juvenile, returning from a 133-day break to win the Group 2 Mill Reef Stakes, over 6 furlongs, at Newbury in September in convincing style.


An enthusiastic, free-going sort, he pulled too hard for his own good when second in the Group 3 Pavilion Stakes, over 6 furlongs, at Ascot on his three-year-old debut. However, he returned to winning ways in the Group 2 Sandy Lane Stakes at Haydock, quickening clear on the firm going to beat Second Thoughts by an impressive 4½ lengths.


Harry Angel was bought, privately, from original owner Peter Ridgers by Godolphin shortly afterwards and made his first appearance in Group 1 company in the Commonwealth Cup at Royal Ascot in June. Sent off 11/4 second favourite, he led until the final half a furlong, but was unable to withstand the hitherto unbeaten Caravaggio, who ran on strongly in the closing stages to win by three-quarters of a length.


The pair met again in the Group 1 Darley July Cup at Newmarket three weeks later but, ridden with a little more restraint, Harry Angel led approaching the furlong marker and, although the likes of Limato, Brando and Caravaggio set off in vain pursuit, he crossed the line 1¼ lengths in front. Winning jockey Adam Kirby said afterwards, “He’s gone from boy to man with every race and I can’t express how good he is.”


After eight weeks off, he was even more impressive in the 32Red Sprint Stakes at Haydock, making all on heavy going to beat Tasleet by 4 lengths. On his final start, in the Qipco British Champions Sprint Stakes at Ascot, he again pulled hard and, having made progress to lead inside the final quarter of a mile, faded to finish fourth, beaten 2¼ lengths, behind Librisa Breeze.