Racing Festivals and Events - Ones to Watch in the Months Ahead! 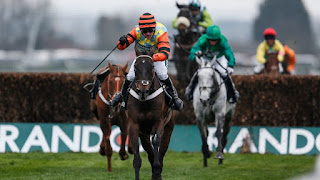 It's certainly been a thrilling year of racing action so far and with a continued focus on the racing calendar and specifically noteworthy festivals and events ahead, we can see that the next 6 months plus are packed with yet more top class racing action, starting with late October's QIPCO British Champions Day and stretching out to early April's Aintree Grand National, where we'll be presenting our usual selection of Grand National tips.


British Champions Day is a single day event held at Ascot, this year on Saturday 20th October. It's a relatively new race, having first taken place in 2011. Despite that the prize money on offer marks it out as a serious money event (almost £4.5 million for the 2018 racecard). The day includes the Group one British Champions Sprint Stakes, and British Champions Fillies & Mares Stakes amongst other competitive races. 35 major races over the flat season constitute the 'British Champions series', of which the first five races of British Champions Day are considered the final.

Doncasters Vertem Futurity Trophy is also a stand out October event. There are currently 76 entries for this group one event held over the flat. 2019 Epsom Derby potential, Too Darn Hot, is surely one to watch.


As we move to November, the festival emphasis moves to jumps, rather than flat with Newbury's Winter Carnival as well as Cheltenham's November meeting creating excitement for racing fans.  In December, we have The International at Cheltenham racecourse, but a highlight for me are the Christmas festivals with Sandown Park's Tingle Creek Christmas Festival as well as Kempton Parks' Christmas Festival bringing some festive racing excitement our way.

There are no major festivals or racing events in January. February sees the Welsh Grand National, though for many the real action starts the following month with the much anticipated Cheltenham Festival, a four day national hunt feast of racing featuring highly anticipated races such as the Queen Mother Champion Chase, Champion Hurdle, Stayers' Hurdle and of course the Cheltenham Gold Cup. The Gold Cup is a race that eclipses most others in terms of its profile and history and has elevated the likes of Best Mate and Kauto Star into the echelones of racing royalty due to their consistent successes in the race.


April brings us what's surely classed as 'the one to watch' for even those not heavily into racing. I'm of course refering to the Grand National, held at Aintree, Liverpool. This three day meeting taking place just as the excitement of Cheltenham has died down and really draws in the crowd on course, with numbers close to 35,000 on days two and three. TV screens across the nation and the world will also to tuned in, as without a doubt the Grand National has global appeal.
Each day of the Grand National festival has its highlights, with the first day kicking off with four grade one races, the next featuring the elegance and fun of Ladies Day and on Saturday we have the Grand National itself. Steeped in tradition going all the way back to 1839, with 4 miles 2 furlongs and 30 tough fences to separate the best from the rest, the Grand National offers the potential to cement a place in racing history, alongside the likes of three time winner Red Rum. If there's one race to win as a jockey, trainer or owner, it's definitely the Grand National.
Posted by G at 04:54