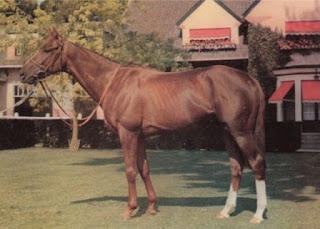 Bred and owned by Jean Ternynck and trained by Ettiene Pollet in Chantilly, Sea Bird was acknowledged as a smart juvenile in his native France, although he was overshadowed by his precocious stable companion Grey Dawn, who had beaten him 2 lengths in the Grand Critérium, now the Prix Jean-Luc Lagardère, at Longchamp.

However, Sea Bird went from strength to strength as a three-year-old, starting his campaign with a comfortable 3-length victory in the Prix Greffulhe, over 1 mile 2½ furlongs, at Longchamp in April. Six weeks later, Sea Bird faced Cambremont, who had already beaten Grey Dawn in the Poule d’Essai des Poulains – the French equivalent of the 2,000 Guineas – and the hitherto unbeaten Diatome in the Prix Lupin over the same course and distance. He won by 6 lengths, eased down.

Sea Bird started 7/4 favourite for the Derby at Epsom and, off a generous pace, overhauled the leader, I Say, with a furlong-and-a-half to run. He was momentarily ridden to assert his dominance, but was back on the bridle by the time he crossed the line. Officially, he beat Meadow Court, ridden by Lester Piggott, by 2 lengths, but the official winning margin by no means does him justice. If jockey Pat Glennon had committed for home at Tattenham Corner, as Walter Swinburn did years later, it might be Sea Bird, rather than Shergar, who holds the record for the longest winning margin in the history of the Epsom Classic.

Sea Bird next contested the Grand Prix de Saint-Cloud – which, in those days, was open to three-year-olds an upwards – and, after pulverising the opposition, was given a break until the Prix de l’Arc de Triomphe at Longchamp in October. On that occasion, he lined up against the crème de la crème of middle distance talent from Europe and North America, including hitherto unbeaten compatriot Reliance and Preakness Stakes winner Tom Rolfe. However, even such admirably formidable opposition was no match for Sea Bird, who powered clear in the closing stages to beat Reliance by 6 lengths, with Diatome a further 5 lengths away in third.

Sea Bird was rated 145 by Timeform, making him the second highest rated horse since World War II, behind Frankel.
Posted by G at 05:45