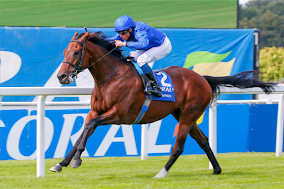 Named after Eclipse, an undefeated champion thoroughbred of the eighteenth century, the Eclipse Stakes has been sponsored by bookmaker Coral since 1976, making it the longest-running Pattern race in Britain. Inaugurated in 1886, the Coral-Eclipse, as the race is popularly known nowadays, is run over an advertised distance of 1 mile 2 furlongs, or 1 mile, 1 furlong and 209 yards to be exact, at Sandown Park in early July each year. The Coral-Eclipse is open to horses aged three years and upwards and, as such, offers the first chance for the so-called 'Classic' generation to race against their elders at the highest, Group 1 level.

Several horses have won the Coral-Eclipse twice, the most recent of them being Halling, trained by Saeed bin Suroor, who recorded back-to-back victories in 1995 and 1996. Lester Piggott remains the leading jockey in the history of the race, with seven wins between 1951 and 1957. Early twentieth century trainer Alec Taylor, Jr. and Sir Michael Stoute are jointly the leading trainers, with six wins apiece.

In recent seasons, the Coral-Eclipse has been won by such luminaries of the sport as Sea The Stars (2009), Golden Horn (2015), Enable (2019) and Ghaiyyath (2020). It is no coincidence that all four of the aforementioned quartet were named Cartier Horse of the Year in their respective years. Indeed, the Coral-Eclipse has always attracted the crème de la crème of middle-distance talent. The roll of honour includes Ballymoss, Mill Reef, Brigadier Gerard, Dancing Brave and Nashwan, to name but a handful.