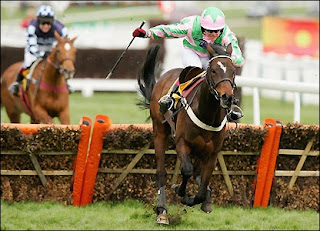 
Small in stature, but a swift, instinctive hurdler, Katchit was bought by Wiltshire trainer Alan King after he watched him win his only race on the Flat, a 0-75 handicap, over 1 mile 2 furlongs, at Salisbury in June, 2006. Katchit made his hurdling debut at Market Rasen the following September and only had to be pushed clear by Robert “Chocolate” Thornton to win by 9 lengths, eased down. Indeed, Katchit won seven of his eight starts as a novice, culminating with two victories at Grade 1 level. In the Triumph Hurdle at the Cheltenham Festival, he led approaching the last flight and was driven clear for an impressive 9-length win, while in the Anniversary 4-Y-O Novices’ Hurdle at Aintree, less than a month later, he stayed on strongly to beat Punjabi by 4 lengths.


Katchit reappeared at Aintree the following October, taking revenge on Degas Art, the only horse to have beaten him as a novice, but was beaten the next twice, in the Fighting Fifth Hurdle at Newcastle and the International Hurdle at Cheltenham.


Nevertheless, he resumed winning ways in the Kingwell Hurdle at Wincanton in February, running on well to beat Blythe Knight by 5 lengths. In the Champion Hurdle a month later, Katchit started only joint fifth choice in the market in a field of 15 runners, which included Osana, who’d beaten him 8 lengths in the International Hurdle, and Harchibald, who’d beaten him 3¼ lengths in the Fighting Fifth Hurdle. However, in the Cheltenham showpiece, Katchit took the lead with two to jump and, although strongly challenged by his old rival Osana at the last flight, stayed on well up the hill to win, all out, with Punjabi a further 5 lengths away in third.


Sadly, Katchit never won again. When he died, as a 10-year-old, in 2013, following colic surgery, Alan King said of him, “He was a marvellous horse. He was just tough. It is definitely up there with my best winners and we will never forget him.”