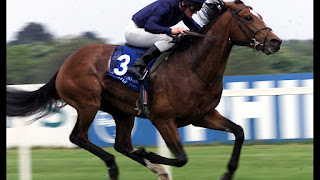 Nowadays, Galileo, by Sadler’s Wells out of Urban Sea, is best known as a champion sire. Indeed, in 2017, he was named leading sire in Great Britain and Ireland for the ninth time in ten years, with 12 Group 1 winners, including Classic winners Churchill and Winter, and just under £12 million in prize money. Since 2012, he has stood exclusively at Coolmore Stud, Co. Tipperary, for a “private” fee, which is reputed to be in excess of €400,000.


In a racing career lasting exactly a year and a day, Galileo won six of his eight races, including the Derby, the Irish Derby and the King George VI and Queen Elizabeth Diamond Stakes in 2001, and earned over £1.6 million in prize money. He raced just once as a juvenile, winning his maiden, over a mile, at Leopardstown, by 14 lengths from subsequent winner Taraza. He reappeared in the Listed Ballysax Stakes, over 1 mile 2 furlongs, at the Co. Dublin course the following April when, at odds of 1/3, he made short work of stable companion – and future St. Leger winner – Milan, winning easily by 3½ lengths. He stepped up in class for the Group 3 Derrinstown Stud Derby Trial over the same course and distance less than a month later but, although he had to work a little harder for victory, he stayed on strongly to beat Exaltation by 1½ lengths.


As an unbeaten colt with a top pedigree, owned by Mrs John Magnier and Michael Tabor and trained by Aidan O’Brien, it was really no surprise that Galileo started joint favourite, at 11/4, for the Derby at Epsom. His main market rival, Golan, trained by Sir Michael Stoute, was also unbeaten and already a Classic winner, having beaten Tamburlaine in the 2,000 Guineas at Newmarket the previous month. Nevertheless, it was Galileo who prevailed, leading inside the final quarter of a mile and drawing clear for an impressive 3½-length win over Golan, with Tobougg a never-nearer third, beaten a further neck. Galileo earned a Timeform rating of 132, making him one of the best Derby winners since the turn of the century, alongside Authorized and Workforce.