Frankel is described by a lot of horse racing enthusiasts as the greatest thoroughbred racehorse of all time. The bay colt was foaled in February 2008 and was then trained by the late Sir Henry Cecil. He won all 14 of his racecourse starts from August 2010 through to October 2012, after which he retired to begin his career in breeding as a stallion.

In 2011, the son of Galileo was the highest rated racecourse in the world. He held that position in 2012 in his final season. When he retired he had earned just short of £3 million in prize money. The World Thoroughbred Racehorse Ratings gave him a rating of 140, the highest since they introduced their system in 1977.

Just like his career on the track, Frankel has made a strong start to breeding as a number of his offspring have been successful in some of the leading flat races in Europe over the last few years. One of those horses is Cracksman who won the Qipco Champion Stakes on British Champions Day last year. He can be backed at horse racing odds 5/1 to prevail the Prix de l’Arc de Triomphe in his first attempt in October, a race which sadly was just outside of Frankel’s ideal distance. 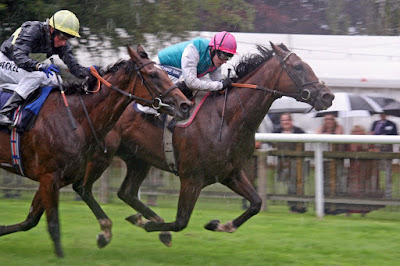 The public saw Frankel on a racecourse for the first in a maiden at Newmarket where he lined up in a field of 12 over one mile. Cecil’s runner got off to a winning start as he scored by half-a-length, beating Nathaniel who went on to be a Group One winning horse himself.

Frankel’s first Group One success came in the Dewhurst Stakes at Newmarket. He justified going off as the odds-on favourite to crown himself the champion two-year-old for the season. That was his fourth straight victory in his opening campaign on the track.

A lot was expected of Frankel as a three-year-old and when he returned at Newbury for the Greenham Stakes, he looked even bigger. He proved that he had lost none of his speed following his winter break as he scored by four lengths on his return to the track. It there was one race that sums up how dominant Frankel was as a miler, though, it was the 2000 Guineas in 2011 where he produced arguably the most dominant performance ever seen in a British Classic. Under the hands of his pilot Tom Queally, the pair hit the front very early into the race and soon went clear of their rivals. Instead of slowing down in the latter stages of the 1m contest, he went further and further from them to blow the field away.

Frankel stepped up in distance from 1m to 1m2f in his penultimate start of his career for the Juddmonte International at York in 2012. The extra two furlongs did nothing to slow him down as he won by seven lengths to prove he was durable in trip.

Racing fans saw Frankel for the last time on the track in the 2012 Champion Stakes where he maintained his unbeaten record. There were some concerns on the day for the horse as the ground was Soft, Heavy in places. The conditions did not spoil his farewell party though as he beat a field which included the French superstar Cirrus des Aigles.

Horse racing fans are still waiting for the next superstar to fill Frankel’s shoes, however, he was a once in a lifetime horse, therefore it remains to be seen if we see anything like him again.