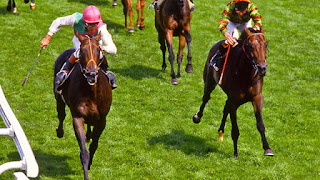 Dancing Brave, owned by Prince Khalid Abdulla and trained by Guy Harwood, was officially the second highest rated horse on the Flat since official international figures were first published in 1977. Only Frankel was rated higher and, even then, only after a “historical recalibration” of the rankings in 2013, which downgraded Dancing Brave from 141 to 138.

During his career, Dancing Brave won eight of his 10 races, including the 2,000 Guineas at Newmarket, the Eclipse Stakes at Sandown, the King George VI & Queen Elizabeth Stakes at Ascot and the Prix de l’Arc de Triomphe at Longchamp, and was named European Horse of the Year for 1986.

An unimposing son of Lyphard, Dancing Brave made his racecourse debut in the Dorking Stakes at Sandown in 1985, which he won convincingly. Guy Harwood later recalled, “[Stable jockey] Greville Starkey got off and said, ‘This horse is my Derby ride.’” Dancing Brave followed up, in similar style, in the Soham House Stakes at Newmarket, and went into winter quarters as favourite for the 2,000 Guineas.

On his reappearance, he started favourite for the Craven Stakes at Newmarket, which he won emphatically. On his return to Newmarket for the 2,000 Guineas, he came with a powerful run going down into ‘the Dip’ and quickened clear in the closing stages to beat Green Desert by 3 lengths, with jockey Greville Starkey looking around for non-existent dangers.

His subsequent defeat by Shahrastani in the Derby, in which Starkey gave him far too much to do, has been well chronicled elsewhere, but his finest hour came at Longchamp on October 5, 1986. Sent off favourite, once again, for the Prix de l’Arc de Triomphe, he was switched off at the rear of the field by Pat Eddery before being asked for maximum effort in the final furlong-and-a-half. Delivering his challenge wide, late and fast, Dancing Brave passed a dozen rivals – including Bering, Triptych and Sharastani – in the final furlong to win by 1½ lengths. Commentator Graham Goode said afterwards, “Pat Eddery has never ridden a better race.”
Posted by G at 04:33