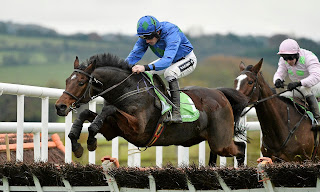 Hurricane Fly is best known for winning the Champion Hurdle at the Cheltenham Festival twice, in 2011 and 2013. However, Ruby Walsh, who rode him to both those victories, always insisted that the son of Montjeu never displayed his true colours at Prestbury Park.

Be that as it may, Hurricane Fly was one of the finest and most consistent horses in the history of National Hunt racing. In a nine-year career, he won 24 of his 32 starts over hurdles, including a world-record 22 Grade One races, and earned nearly £1.9 million in total prize money. His Timeform rating, of 174, was just 1lb inferior to the likes of Gaye Brief, Salmon Spray and Sea Pigeon.

Hurricane Fly finally crossed the Irish Sea to contest the Champion Hurdle for the first time in 2011, having missed the Cheltenham Festival through injury in the two previous seasons. However, those people who had called him the Irish ‘phantom’ soon realised what they’d been missing because, despite taking a keen hold, Hurricane Fly took a slight lead at the final flight and was driven out to beat Peddlers Cross by 1½ lengths.
At the end of his racing career, Ruby Walsh said of him, “Quite simply, Hurricane Fly is the best hurdler I have ever sat on. The only hurdler you can compare him to in my lifetime is Istabraq.” Speaking of Istabraq, Hurricane Fly registered his fifth and final win in the Irish Champion Hurdle at Leopardstown in January, 2015, breaking the previous record of four wins held by the three-time Champion Hurdle winner. Remarkably, Hurricane Fly ran in 10 races at Leopardstown – all Grade One contests – and won all 10.

Co. Carlow trainer Willie Mullins, who took charge of Hurricane Fly from Jean-Louis Pelletan in France in the spring of 2008, simply said of him, “He’s a legend of a horse.” Mullins was, however, thankful that his charge was retiring in good health, saying, “This day was always going to come and it’s great that we’re doing it on our terms, rather than due to an injury or something like that.”