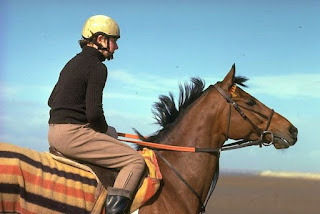 Grand National legend Red Rum requires little introduction. In fact, a poll conducted in 2006, 11 years after his death, suggested that he was still the most famous horse in Britain, ahead of Black Beauty, the eponymous, but entirely fictitious, hero of the novel by Anna Sewell.

For the uninitiated, Red Rum became a household name after winning the Grand National at Aintree an unprecedented three times, in 1973, 1974 and 1977. His most dramatic success, in terms of the way in which the race unfolded, was his first. Ridden by the late Brian Fletcher, Red Rum was sent off 9/1 joint favourite alongside the great Australian steeplechaser Crisp, ridden by Richard Pitman. Crisp, an instinctive front-runner, set off in front and, when his nearest pursuer, Grey Sombrero, fell at the Chair, led the field by 25 lengths. Crisp continued to jump superbly for most of the second circuit until, approaching the second last fence, his welter burden of 12st began to tell. Pitman recalled, “I felt the strength fall out of him.”

Crisp jumped the last fence 10 lengths in front, but on the long run-in Pitman made a crucial error of judgement that he later described, saying, “I went for the whip with my right hand, forcing Crisp to veer away from, rather than towards, the Elbow. It cost us two or three lengths, crucial momentum and, ultimately, the National.” In any event, Red Rum, carrying just 10st 5lb, overhauled Crisp in the dying strides to win by three-quarters of length. In so doing, he broke the Grand National record time, which had stood for 40 years, by nearly 20 seconds; the record wouldn’t be broken again until 1990.

Red Rum returned to Aintree in 1974, carrying 12st to a 7-length victory over L’Escargot, which made him the first horse since Reynoldstown, in 1936, to win back-to-back Nationals. He was beaten by the same horse in 1975 and by Rag Trade in 1976 so, by the time he lined up, as a 12-year-old, in 1977, many observers thought his best days were behind him. “Rummy”, as he was affectionately known, was having none of it, though; patiently ridden by new jockey Tommy Stack, he was left in the lead by the fall of Andy Pandy at Becher’s Brook on the second circuit and steadily drew clear in the closing stages to beat Churchtown Boy by 25 lengths!