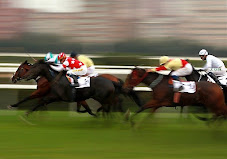 Owned by Belinda McClung and Deborah Thomson, a.k.a. 'Two Golf Widows', and trained by Lucinda Russell near Kinross, in eastern Scotland, One For Arthur is best known as the winner of the 2015 Grand National. Indeed, he had the distinction of being just the second horse trained north of Hadrian's Wall – the other being Rubstic, trained by John Leadbetter in Denholm, near Hawick, in 1979 – to win the premier steeplechase.

One For Arthur had demonstrated his Grand National credentials when staying on well to finish fifth, beaten just 3 lengths, in the valuable Becher Chase, over 3 miles 2 furlongs, on his first attempt over National fences the previous December. He subsequently won the Classic Chase, over 3 miles 5 furlongs, at Warwick in January in taking style and headed to Aintree at the top of his game.

Despite being 11lb higher in the weights than at Warwick, One For Arthur was sent off 14/1 fourth favourite for the National, behind Blaklion, Definitly Red and Vieux Lion Rouge. Under a confident ride from jockey Derek Fox, who was making his debut in the race, he was held up in rear, as he had been at Warwick, but made steady headway throughout the second circuit.

Favourite Blaklion took a clear lead as the field crossed the Melling Road for the final time, but One For Arthur, who had travelled and jumped well throughout, moved upsides at the second-last fence and soon quickened into the lead. On run-in, recent Cheltenham Festival winner Cause Of Causes appeared as his main challenger, but he was not to be denied and stayed on strongly to win by 4½ lengths.